Although Donald and Peta have been my favs from the second week of the season, I felt the celebrity who improved significantly on Dancing with the Stars this time was Maria Menounos, and I admit that I voted for her for the last two Mondays. But it may have been a too little too late situation.

My sense is that the top two stars this season have remained William and Katherine. William because he’s sexy and Katherine for her technique. One of them will be the champion. 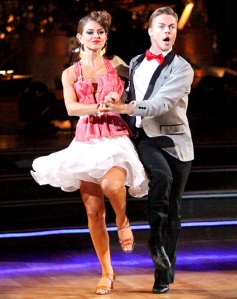 That being said, I am sorry to see Maria go as she embodied Derek Hough’s amazing choreography and grew doing so. Choreography can not be fulfilling if it doesn’t have the dancers to perform it as it merits. For the last two weeks, Derek captured Maria’s personality and gave us surprises, stunning originality and illuminated the craft of dance using everything in the book. They are the champions for me this season.

Attacked and driven. Earnest. However, I noticed William’s feet and legs over and over again – and in his chenees, the turning “chain” step across the floor, he looked as though he was turning with his weight back on his heels. I mention it because it marred the performance for me. In a move near the end of the dance, he threw his arms so rather than looking like an intentional arm movement, the port de bras looked like a spasm.  He doesn’t articulate nor create dynamic shapes when he uses his arms though he does create a nice line when he extends his arms straight out. I’m afraid I didn’t see his usual magic and charisma, but then, he may have had to focus so intently to perform tango that he had less to give.

Katherine & Mark. Quickstep. My mark 10.
Bravissimo. The dance built and these two gave us everything of which they are capable. Some stunning technique and gorgeous quickstep styling.

Donald & Peta. Waltz. My mark 10.
My kind of number. Seamless. Romantic. What a mood they created. Donald and Peta have such a wonderful connection. Donald allows Peta to dance freely – to be all she needs and wants to be – like a good partner needs to do. Now Donald is a big guy – long legged and loose. Yet, I was not bothered at all by his footwork, or his legs and feet as I was by William’s, and I could have been. I thought this really well danced. I can’t comprehend how Len can fault Donald on head position when one can’t tell what is required choreographically to tell the story and be in the romance of it. Quite often it seems that Len does not want this couple to win.

William & Cheryl. Samba. My mark 9.
Some luscious slow sensual moves. Really enjoyable. Definitely samba. However, in this high stakes competition with such incredible dancers, I felt the dance didn’t have the ingenuity and finesse to knock my socks off and have me shouting, “now that’s how champions dance.” We need more content and creativity next week, Cheryl.

Katherine & Mark. Salsa. My mark 9.
Such an energetic dance. She gave it everything. Not even sure what happened at the end. On energy and technique, this was a ten. I suppose my feelings about these two would get me booed off the stage if I were saying this live in the show, but I felt as though I was seeing a re-manufactured dance exactly like one they did earlier in the season, chacha.

Again, this is a high stakes competition and each number needs to look fresh and new – like something we’ve never dreamed of before. Katherine glowed, yes, and I do not fault her. I felt the movement didn’t allow her to breathe, to be her in contrasting, slower, articulated even syncopated movements that can be part of salsa too. That’s on Mark as choreographer and not her, and yet, I know he’s giving this everything he’s got. Comments cannot just be for the celebrity. The pro sometimes needs to grow too in order to showcase a star’s gifts and personality. At this point I would have her working with a female coach. She’s demure and ladylike. More softness, Mark. Not everything needs high energy and attack to work. She’s not connecting with me. It’s as though she is back in herself yet smiling through it.

Donald & Peta. Samba. My mark 10.
Great story with samba moves. This is what I mean. The dance was out of the ordinary and it showed him off as it did Peta. Donald embodied his character from beginning to end and that’s a gift. I love how these two work together. They play off each other and enhance one another. They are in the moment. Donald finished each move and was completely in the style and mood of this piece throughout. Loved it.